Ekorna > Blog > Brac Island in Croatia is a piece of paradise

Every summer many sun-seeking tourists flock to the magnificent Brac Island in Croatia, the third largest island in the Adriatic Sea. Most visitors rush to the famous town of Bol, the only settlement of its southern coast, which is also the obligatory swim stop for most of the small ship cruises in Croatia. Especially in the summer months, the town is packed with people soaking in the sun and dipping into turquoise waters of the Adriatic on one of Croatia’s most famous beaches: Zlatni rat. Its horn-like shape seems to appeal to everyone who comes to the island. Maybe even more so for constantly changing its form during the day due to the rise and falls of the sea level.

Being such an iconic part of the Croatian coast, Zlatni rat is on the itinerary of all cruises from Split, which is just an hour or so away. Have a look at the wide range of ship categories and routes. For more information and availability please contact our friendly agents at ➨ info@ekorna.net who will be happy to tell you that small ship cruises are simply the best way explore the Dalmatian islands. These “floating boutique hotels” that only carry up to 40 passengers, visit all the most important Dalmatian island in one week. Brač is usually their first stop.

on cruises to Brac Island in Croatia 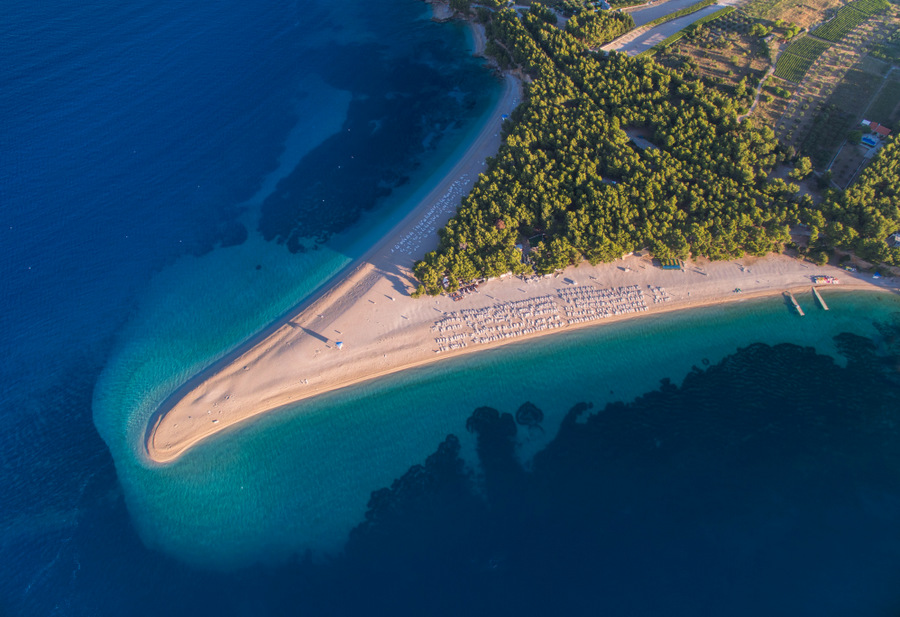 Although Brac has always been inhabited, it was first subject to Salona (the rich Salonians built villas and also sought refuge here when their town was attacked by the Avars), and then to Split. Later both Split and Brac came under Byzantine and then Venetian rule. The Venetians who controlled the island between 1420 and 1797 were building villages in the interior but neglect to erect any defence structures to prevent the pirates and Turks landing. One of those villages is Nerežišća, located almost in the centre of the island. For a long period of time Nerežišća was Brac’s main town. The governor’s palace, the Logga and a pedestal with the lion of St Mark are signs of its former status. Nowadays the interior of the island is almost deserted. Over time tough living conditions pushed the people to move to the mainland for work. What they left behind are piles of rocks – the result of the back breaking labour of islanders who over hundreds of years, gathered the rocks to clear land for vineyards and orchards.

At only 40 kilometres long and 15 kilometres wide, Brac island in Croatia has an interesting geological structure. In some areas the ranges of limestone hills have sinkholes and are cut by ravines and gorges. In other areas a white hard stone prevails. It has been quarried since ancient times and is still much sought after. The town of Pucisca is famous for its quarry of white marble which has been used to build the Diocletian palace in Split. The locals will be eager to tell you that the same quarry  also provided marble for Hagia Sophia in Istanbul, the building of the United Nations in New York and even the White House in Washington.

Even though the island of Brac is more of a beach destination and usually not on the itinerary of those who visit Croatia for its cultural heritage, there are still many great historic sights worth vising. One of them is definitively the Monastery Blaca, a place lost in the southwestern part of the island. This Old Franciscan Monastery from the 16th century has a very interesting story of self-management carried out by the inhabitants of this curious place.

The port of Supetar on the northern shore is the most significant town of the island, buzzing with locals and tourists. Take a stroll among its old streets and visit one of the town’s priceless jewels: the magnificent church of Mary Annunciation. As you walk through the Supetar the smell of olive trees and not so distant vineyards encourage you to taste delicious local wines and oils.

For those of you seeking active holidays on Brac, we recommend a climb to the summit of Mount San Vito (Vidova gora). At 778 meters above sea level this is the highest peak of any Adriatic islands and offers spectacular views over Zlatni rat as well as the islands of Hvar and Vis in the distance. It’s a two hour hike, but you can also bike or even drive to the top.

Although the Brac island in Croatia is not as popular with tourists as its neighbour Hvar, it is defensively worth considering putting it on your Croatian itinerary, especially if you prefer travelling to less busy places. On the other hand, you can easily combine the land tour with a small ship cruise in Croatia which features Brac. Get in touch with us to modify your trip according to your wishes. We are a local travel agency specialised in custom-made tours to all Balkan countries.

to get a tailor-made trip to Croatia 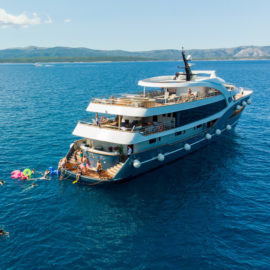 Colours of Dalmatia from Split

LUXURY CRUISE We invite you to explore the Dalmatian islands on a small ship cruise through Croatia on this luxury...

STANDARD CRUISE Visit one of the pearls of the Adriatic and enjoy the Dalmatian islands. This way you will get...