You may have heard that Slovenia is a land of fairy-tale castles which can be found throughout this little green country. No matter if you a true history buff or just a very romantic person, we are sure you will enjoy this special Castles of Slovenia Tour tailor-made just for you.

At Ekorna Travel Agency we specialise in preparing unique experience itineraries of Slovenia and other Balkan countries. This means that all our pre-prepared tours of Slovenia can be further adjusted to your wishes and interests. Of course, the most iconic castles of Slovenia are featured in every itinerary, but we can add extra visits for those of you who wish to explore even more of this country’s history, secrets and legends. Here is the list of most Game of Thrones worthy castles and fortress in Slovenia.

for a tailor-made tour of Slovenia 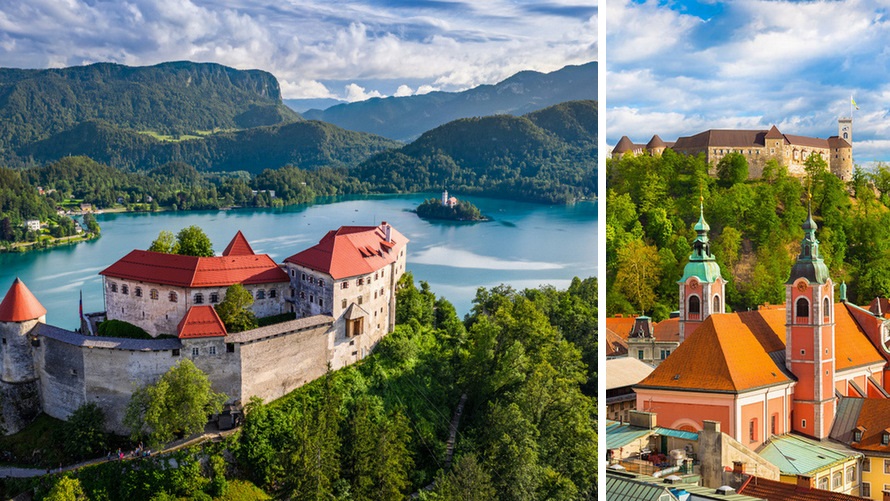 Ljubljana Castle is a crown of Slovenian capital and probably its most important tourist attraction, offering amazing views of the city and some great dining options. The first owners of the castle were the Spannheim who ruled these lands until 1335 when the central region of Slovenia became part of the Hapsburg Empire. This powerful dynasty decided to extend the influence of the fortress, providing larger facilities including its own arsenal. In the 19th century the castle was converted into a jail and prisoners were being held here until the first years of the 20th century when it became home for poor families of Ljubljana. They inhabited its walls until 1963.

After the complete reconstruction in the beginning of the third millennium, the castle became an important part of the city’s heritage and is nowadays the site of numerous events such as music festivals, theatre, conferences, and even weddings. You can hike the castle hill via one o the numerous paths leading to the top or simply take a convenient funicular railway.

There is no talk about castles of Slovenia without mentioning the fairy-tale Bled Castle, located  located less than an hour drive from Ljubljana in the pretty alpine town of the same name. It sits on the top of the 130-meter high cliff overlooking the famous lake beneath. The quarters are restored and feature various relics and documents from the times long gone. Among other exhibits, you can take a look at a copy of the Gutenberg printing device which explains the process and the techniques of that times. Also, don’t miss the opportunity to mint your own coin and take it home as a souvenir of your trip back to the middle ages.

This appealing castle was also forming a part of Habsburgs’ possession and despite the constant reforms and enlargements, the Bled Castle somehow managed to retain its original structure and charm. Try to plan your visit of Bled during the medieval markets to really get a full insight of the past.

The castle also hosts a great restaurant which allows you to enjoy your meal on its terrace while taking in the spectacular views of the lake and the mountains in the background.

Another iconic castle is the one at Predjama. Located very close to the famous Postojna Cave (about 60 kilometres from Ljubljana), the Predjama Castle is definitely one of the most popular tourist attractions in Slovenia. So, what is so special about this place? The first thing is its incredible strategic location in the middle of a 123-meter-high rocky cliff which makes it very difficult to conquer. Its second, maybe not so obvious attribute, is its position just outside the karstic cave which provides the Predjama castle with a secret entrance. The name Predjama literally means “in front of the cave”. The extended entry ticket will also give you access to the 700 meters of cave’s most interesting parts, so you can walk the secret tunnel yourself.

Since its construction in the 12th century, this Renaissance castle has seen numerous battles and changed many owners. Without a doubt, its most famous resident was Baron Erazem Lueger, notable for having the guts to confront the powerful Habsburg dynasty who ruled these lands at that time. Thanks to the secret passages, he and his men were able to leave the castle without being seen by the enemies and thus withstand the imperial army’s siege. Unfortunately, the story doesn’t have a happy ending – at least not for Erazem – who was betrayed by one of his servants and infamously killed by a bullet while sitting on the toilet.

If you visit Predjama Castle during its popular Knight Fair, which takes place here every summer, you can witness a representation of medieval fights and even try to put on a heavy armour suit yourself.

Explore the castles of Slovenia on a tailor-made tour

Eastern part of Slovenia also hosts many strongholds of great historic value. One of them is certainty the Castle of Celje, the largest fortress in Slovenia and historically its most important one. It was the home base of the Counts of Celje – the powerful feudal dynasty that ruled these lands in the 14th century and were one of the Habsburgs’ greatest rivals in Central Europe. Their emblem – the three golden stars – are now part of Slovenia’s seal and flag. 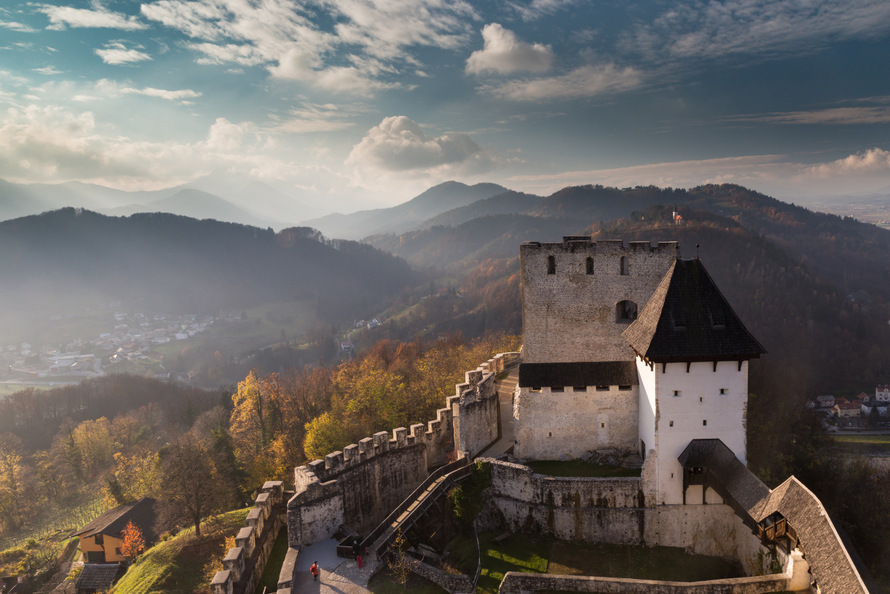 Nearby Ptuj is the oldest settlement in Slovenia dating back to the roman times when it was known as Poetovio. The Ptuj Castle above the medieval town centre is much younger and is a conglomerate of structures built between 14th and 18th century. It is still a great place to visit as it houses an impressive museum. Those of you with less interest in history, will enjoy the great views of Ptuj’s red roofs and the Drava River in the background. 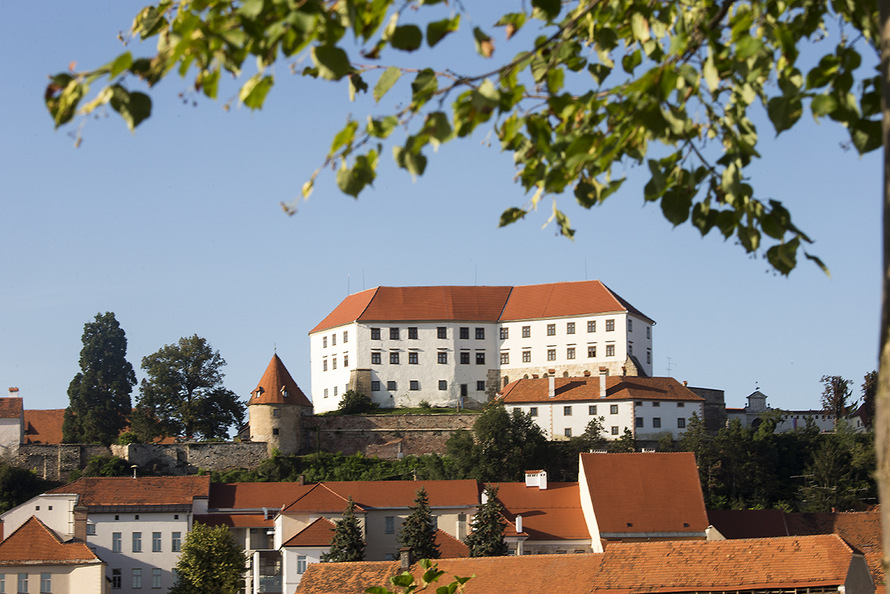 The attractions mentioned above are just some of the most famous castles of Slovenia. There are many more waiting to be visited and we can include them into your tailor-made itinerary of Slovenia. Here is a list of additional castles worth vising:

This beautiful renaissance mansion was home to one of the greatest Slovenian minds – Janez Vajkard Valvasor. Most of our knowledge of the local culture and folklore before the 17th century comes from his much celebrated book The Glory of the Duchy of Carniola, as these lands was known in the time of the Habsburg Empire.

Not all castles of Slovenia were turned into museums. Some of them are now hotels and present a great opportunity for you to spend a night like a king or a queen. We can easily adopt your tailor-made tour of Slovenia to include a night or two in one of the Slovenia’s castles or mansions. One of the best choices is a 5-star hotel of ➨ Otočec Castle located on a pretty island in the middle of Krka River. In the same area you can also choose ➨ Mokrice Castle, another top-end hotel whose superb services are complemented with a golf course and a top-notch restaurant. Both castles are also popular wedding locations and a great pit stop when travelling from Ljubljana to Zagreb.

Another great sleeping option can be found in the wine region of Goriška Brda. A romantic ➨ Gredič Castle overlooking the vast vineyards has its own wine cellar and is a perfect location for all gastronomy lovers.

Other castles in Slovenia that also offer unique accommodation experience are the baroque mansion Kendov dvorec near Idrija, Strmol Castle in Cerklje na Gorenjskem, Lambergh Château near Radovljica and many more. Let us know if you are interested in these kind of experiences and we will gladly include some of them into your tailor-made itinerary of Slovenia.

Still don’t have enough? Don’t worry, the list of Slovenian castles is endless and you are guaranteed to find one in almost every town no matter how small. If you are really interested in travel to Slovenia to visit its numerous castles as well as other historic sights, we can provide a professional diver-guide who can take you around the country and point out all the fascinating locations. Let us know your interests, we can prepare an amazing tailor-made tour according to your time constraints and budget.

and visit the castles of Slovenia

TAILOR-MADE TRIP This itinerary will make your travel to Slovenia complete. It will introduce you the European destinations of excellence...

TAILOR-MADE TRIP The Best of Slovenia Tour features the most beautiful natural landscapes and important cultural sites. You will explore... 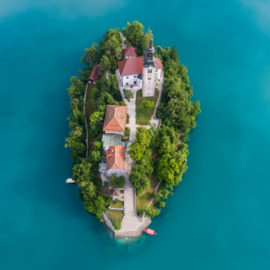 ESCORTED TOUR The escorted tour of Slovenia will take you to the most impressive places of this green little country... 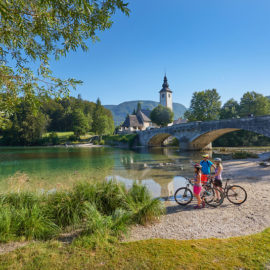 SELF-GUIDED BIKE TOUR We invite you to discover the pearls of Slovenian Alps! On this tour of Slovenia by bike...

SELF-GUIDED BIKE TOUR Those of who enjoy active holiday might want to try cycling in Slovenia. From its capital of...